2023 Landscape of Abortion in Texas & Beyond
Filed Under: Education, Life News

As we enter 2023, we are still rejoicing that six months ago the Supreme Court of the United States overturned the 1973 landmark case Roe v. Wade. In Dobbs v. Jackson Women’s Health Organization the High Court found there is no constitutional right to abortion and returned the question to the individual states. The reversal of Roe was certainly a massive victory, but abortion is still tragically pervasive in our nation. The fight continues, but looks different.

Since the Dobbs decision in June, states and the federal government have scrambled to restrict or protect abortion access. The resulting chaos will likely continue for the foreseeable future.

The New York Times last month described the Post-Roe landscape of the abortion fight. “The Supreme Court’s reversal of the 50-year-old decision in Roe v. Wade transformed the debate and politics around abortion in the United States, shifting battles to state courts and legislatures — and galvanizing a fresh wave of voters in the midterm elections who turned out more forcefully than ever to make abortion rights a winning issue…Heading into the new legislative sessions next year, supporters and opponents of abortion rights are girding for fresh combat, with new ground rules, new opponents and new battlefronts.”

I. THE STATE LEVEL

Some states have enacted trigger laws implementing total bans on abortion or severe restrictions on access. Other states allow abortion or even protect abortion effectively until birth. A map published by The Dallas Morning News shows the status of abortion access after the November 2022 midterm elections. Not surprisingly, a legal volley has ensued resulting in some state bans or restrictions being blocked by the courts. 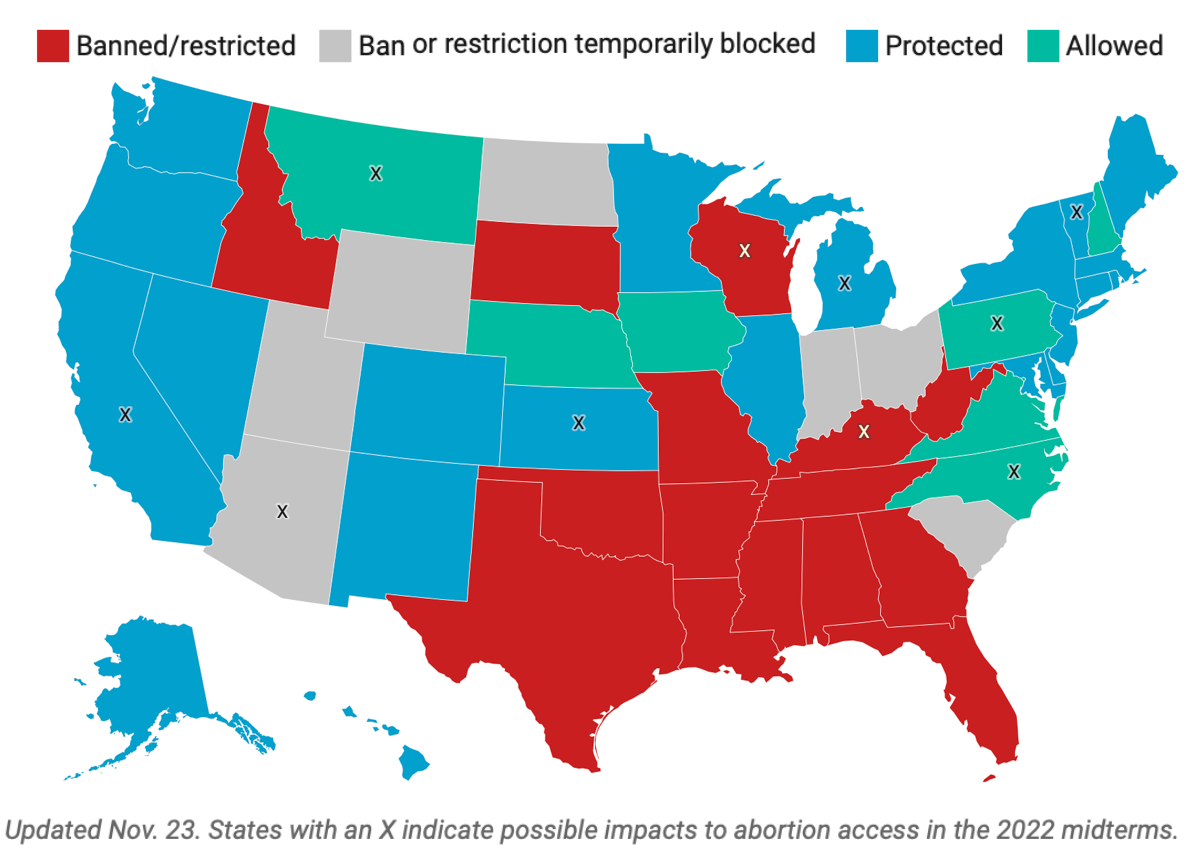 There are some encouraging statistics being released. According to a study by the Society of Family Planning, surgical abortions performed in restrictive states dropped 95%. In Texas, surgical abortions dropped in 2022 from 2,770 in April to about 10 in August. The closest out-of-state clinics to which Texans can travel for an abortion are in Kansas and New Mexico. For Dallas residents, the closest option is Planned Parenthood in Wichita, Kansas, which is about 362 miles away.

But there are discouraging statistics as well. According to a study published in theJournal of the American Medical Association, online demand for abortion-inducing chemical pills — mifepristone and misoprostol — spiked nationwide primarily in states that enacted bans after the fall of Roe. These telemedicine abortions are particularly worrisome as they are self-managed without a physician’s care. Chemical abortions, which can result in dangerous complications for the mother and even death, currently constitute over half of the abortions in our country.

Distressingly, Texas experienced the 6th largest increase in post-Roe online abortion pill orders even though the pills are illegal in our state. Providers are targeting abortion minded women no longer lawfully able to obtain a surgical abortion like in Texas. The availability and purchase of chemical abortion pills on the internet from both domestic and overseas sources is widespread and difficult to monitor, providing the opportunity to circumvent state abortion bans.

The largest overseas provider of chemical abortion pills is Netherlands-based Aid Access which connects women in the United States with doctors in Europe and mail-order pharmacies in India. As reported by The New York Times, the Self-Managed Abortion Needs Assessment Project at the University of Texas at Austin found that in July and August 2022 the number of pills requested each month from Aid Access post-Roe doubled.

A. THE BAD NEWS

In the wake of Dobbs, the Biden-Harris Administration immediately denounced the decision as an affront to women’s fundamental rights. President Biden signed two executive orders to protect and expand women’s access to abortion including online purchases of chemical abortion pills and delivery through the mail without an in-person doctor’s visit and ease of travel between states to get an abortion in states where it is legal.

President Biden and other Democrat lawmakers have made it unequivocally clear that Congress codifying Roe as federal law and going radically well beyond to allow abortion up until birth will continue to be a top legislative priority. They will almost certainly continue with these efforts and do everything in their power to advance abortion access in the meantime.

The midterm elections giving Republicans control of the House starting this week in the 118th Congress makes an encouraging difference. Louisiana Republican and incoming House Majority Leader Steve Scalise announced last Friday two bills focusing on abortion will be among the first items of legislative business in the next two weeks. The Born-Alive Abortion Survivors Protection Act would require care to be given to an infant who survives an abortion procedure. The other bill would permanently codify the Hyde Amendment which prohibits federal funding for abortion procedures.

There are several highly noteworthy points about what to expect going forward in our state.

January 2023 marks the first time since the overturn of Roe v. Wade that Texas lawmakers will return to Austin and pass new bills. Abortion is expected to take center stage. Democrats have already filed nine bills for 2023 to bring elective abortion back to Texas that would do the following:

More attacks are expected. For additional details on the proposed pro-abortion legislation in Texas, see this report by Texas Right to Life.
C. MORE WAYS TO SUPPORT MOTHERS
As reported on December 29 in The Washington Post, Republican lawmakers in Texas, other states with abortion bans and organizations in the pro-life movement are exploring ways to implement state level policy to care for the increasing number of women having babies in the wake of Roe’s overturn. Pro-life groups are lobbying for passage of a year-long postpartum Medicaid extension at the next legislative session that starts this month. “This policy fits into a bigger collage of pro-life policies we can pass to promote a pro-life Texas,” said John Seago, President of Texas Right to Life. “We want Texas to be abortion-free, but we also want Texas to be pro-life. We want these mothers to be healthy and to have access to the care they need.”

Clearly the battle lines are drawn. The fight requires each of us to be educated about what is at stake regarding abortion and to be ready for the courageous conversationswith friends, family and co-workers. We must make our voices heard and use our Kingdom resources with which we have been blessed. We pray you will join us in making the argument for life persuasively, kindly, truthfully, openly and even loudly in our homes, community and churches.

THE MOMENT IS NOW

Please make a donation here to support the work of Council for Life. The needs of our Beneficiaries serving vulnerable unborn babies and mothers are greater and more urgent now than ever after Dobbs.

Thank you for sharing in our mission to honor the worth, dignity and irrefutable humanity of every unborn baby.