Last September, we reported the dark day we never dreamed we would witness in the United States of America when the U.S. House of Representatives narrowly passed the Women’s Health Protection Act of 2021 (WHPA). The vote was on party lines with House Democrats voting almost unanimously to pass it.

WHAT IS THE WOMEN’S HEALTH PROTECTION ACT?

WHPA is arguably the most radically extreme abortion law ever passed by a legislative body anywhere in the world. WHPA would effectively codify into U.S. federal law an unlimited nationwide right to abortion up until birth and eradicate all State government restrictions on abortion. (Read WHPA HERE)

U.S. Senate Majority Leader Chuck Schumer (D, NY) recently announced that he is planning to bring WHPA for a vote in the Senate. The vote will be TODAY, February 28. 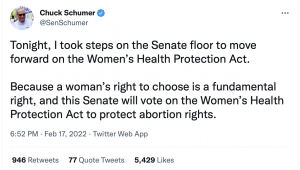 WHY WHPA WILL NOT PASS TODAY

We are grateful to God that WHPA has virtually no chance of passage today in the U.S. Senate. WHPA does not have the 60 votes needed to overcome the Senate filibuster rule. WPHA likely does not even have the vote of the 50 Senate Democrats because pro-life Democrat Joe Manchin of West Virginia opposes the bill. Even pro-choice Maine Republican Susan Collins says WHPA is “extreme.” (See National Review article HERE)

WHY BOTHER WITH WHPA TODAY SINCE DESTINED TO FAIL?

Despite being doomed for almost certain failure today, pro-abortion leaders are nonetheless advancing WHPA. They are carrying out the demands of pro-abortion groups such as Planned Parenthood and National Abortion Rights Action League (NARAL) and scrambling in response to the looming threat of the U.S. Supreme Court’s reversal of Roe v. Wade in the Dobbs case and the flurry of state pro-life laws enacted such as the Texas Heartbeat Act.

If the vote fails today, the issue will not die or fade away. If pro-abortion leaders maintain control of the U.S. House and secure two more Senate seats this November, they will most assuredly seek to eliminate the chamber’s longstanding filibuster rules and be intent upon passing this radical abortion bill in the 2023 Congress.

Many describe WHPA as an attempt to codify Roe v. Wade, but the reality is that WHPA goes well beyond the judicial abortion rights provided by SCOTUS in Roe. WHPA effectively allows abortion through all nine months of pregnancy by doing the following:

Making abortion legal for any reason at any time prior to fetal viability which occurs at about 22 to 24 weeks of pregnancy, therefore further allowing:

Striking down common pro-life restrictive measures in states. Under WHPA, states would no longer be allowed to require:

Legalizing abortion up to the time a baby is born if a woman’s abortion provider concludes continuation of her pregnancy would pose a risk to her life or health (which can include emotional or mental health). Note that this provision significantly DOES NOT:

Please join us in praying that the morally unconscionable agenda by those perpetrating this evil culture of death in our country that WHPA disturbingly manifests would be thwarted. Please pray also that their hearts and minds would be transformed to value and love every unborn child.

We continue to pray for judges and legislators at the federal and state level to use their positions of leadership and authority to honor the Sanctity of Life. We give thanks for and pray for God’s protection over brave leaders who stand and speak for the unborn like Representative Henry Cuellar from Texas.